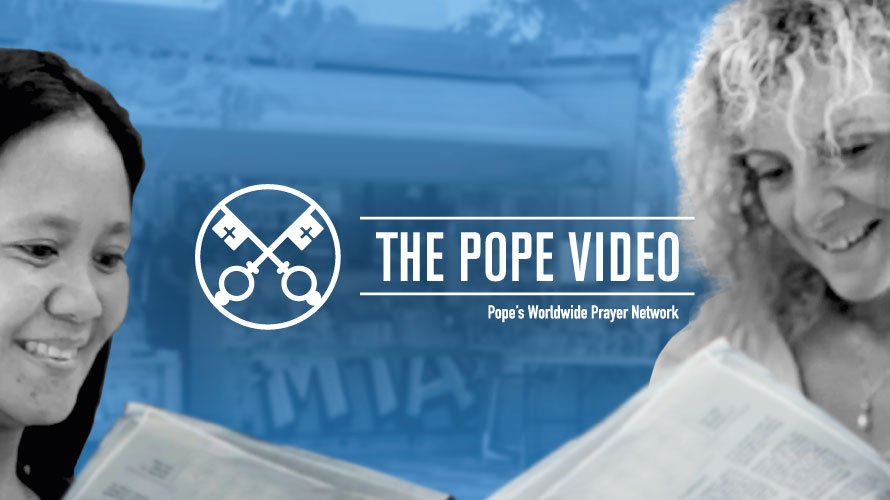 We pray that by the virtue of baptism, the laity, especially women, may participate more in areas of responsibility in the Church, without falling into forms of clericalism that diminish the lay charism.

No one has been baptized a priest or a bishop. We have all been baptized as lay people.
Lay people are protagonists of the Church.
Today, it is especially necessary to create broader opportunities for a more incisive female presence in the Church.
And we must emphasize the feminine lay presence because women tend to be left aside.
We must promote the integration of women, especially where important decisions are made.
We pray that by the virtue of baptism, the laity, especially women, may participate more in areas of responsibility in the Church, without falling into forms of clericalism that diminish the lay charism.

The Pope Video – October 2020: Women in leadership roles in the Church

In the “Pope Video” for October, the missionary month, Pope Francis calls for the promotion of greater integration of the lay faithful, especially women, in areas of responsibility in the Church.

The laity are protagonists in the Church

(Vatican City, October 8, 2020) – The Pope Video for October has just been published, revealing the intention that Pope Francis is entrusting to the entire Catholic Church through the Pope’s Worldwide Prayer Network (which includes the Eucharistic Youth Movement – EYM). During this missionary month, the Holy Father highlights the role of the laity, whom he considers true protagonists in the proclamation of the Gospel. He asks especially that women be given participation in “areas of responsibility in the Church.” This video has been produced in collaboration with the Dicastery for Laity, Family and Life with participation from senior Vatican officials and from Vatican Media journalists.

Increasing areas of relevant feminine presence in the Church

For the Holy Father, it’s essential for women to have a more relevant presence, because they “tend to be left aside.” Francis has made many gestures to give momentum to this desire to give women greater weight in the Church. For example, in 2016 he elevated the memorial of Mary Magdalene to the rank of a liturgical feast. In the text of the new Mass’s preface, the saint is defined as the “Apostle of the Apostles.” He took this decision in order to highlight the importance of this woman, the first who saw the face of the Lord after his Resurrection from among the dead, the first whom the risen Jesus called by name,[1] and the first to receive from Jesus Himself the mission of announcing his Resurrection. Similarly, Francis, since the beginning of his pontificate, has named more and more women to roles of responsibility in the Church.

Fr. Frédéric Fornos S.J., International Director of the Pope’s Worldwide Prayer Network, observes that “since 2013, much has been accomplished, but more needs to be done.” He calls to mind words of Pope Francis from Evangelii Gaudium: “Demands that the legitimate rights of women be respected, based on the firm conviction that men and women are equal in dignity, present the Church with profound and challenging questions which cannot be lightly evaded” (EG 104). Regarding this video, in which Francis promotes “the integration of women in the settings where important decisions are made,” Fr. Fornos points out that “by virtue of Baptism, we are all called to faithfully proclaim and serve the Gospel of Jesus Christ, to be missionary disciples of the Lord. Nonetheless, among the lay faithful, women have been consciously and unconsciously relegated to an inferior level. As Francis reminded us in Querida Amazonia, many women, moved by the Holy Spirit, keep the Church alive in many parts of the world with remarkable devotion and deep faith. It’s essential that they participate more and more in areas where decisions are made. This requires a profound change of mentality; it requires our conversion, which implies prayer.”

The meaning of Baptism and of the mission of the Church

Dr. Linda Ghisoni, Under-Secretary for the Lay Faithful, reflects: “In the October 2020 video dedicated to the mission of the laity in the Church, the Holy Father begins by speaking about Baptism. This is very important because it allows us to understand that the desire to have greater participation on the part of laity—and of women in particular­—in areas of responsibility of the Church should not be interpreted as if it were a sociological project, or a desire to ensure greater quotas for power sharing between women and men, or between laity and clergy. In other words, it’s not a demand for the opportunity to obtain jobs. Indeed, if we take cognizance of the meaning of our Baptism, we will understand what our place in the Church is: for the Church to be itself, it cannot do without the specific contributions of laity, of women, who by vocation are an integral part of it.”

adminOCTOBER: Women in leadership roles in the Church10.08.2020