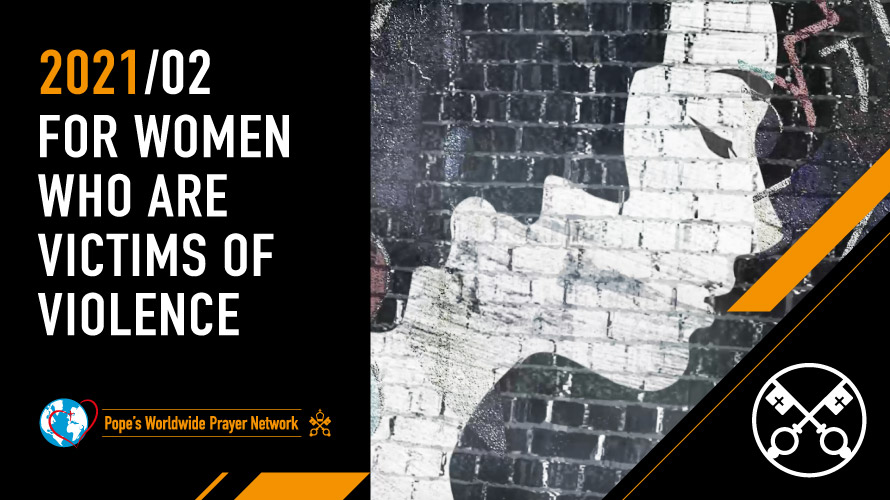 Let us pray for women who are victims of violence, that they may be protected by society and have their sufferings considered and heeded by all.

Today, there continue to be women who suffer violence. Psychological violence, verbal violence, physical violence, sexual violence.
It’s shocking how many women are beaten, insulted, and raped.
The various forms of ill-treatment that many women suffer are acts of cowardice and a degradation of all humanity. Of men and of all humanity.
The testimonies of the victims who dare to break their silence are a cry for help that we cannot ignore.
We must not look the other away.
Let us pray for women who are victims of violence, that they may be protected by society and have their sufferings considered and heeded by all.

The Pope Video – February 2021: For women who are victims of violence

The Pope regarding violence against women: “We cannot look the other way.”

The Pope Video for February sends out a powerful message against the various kinds of violence against women. In the face of this “degradation of all humanity,” the Holy Father asks that women be protected by society and that their sufferings be heeded by all.

(Vatican City, February 1, 2021) – The Pope Video for February has been published, with the prayer intention that Francis is entrusting to the entire Catholic Church through the Pope’s Worldwide Prayer Network. It is a powerful message against the violence that millions of women suffer daily: “psychological violence, verbal violence, physical violence, sexual violence.” For Pope Francis, these abuses are “acts of cowardice and a degradation of all humanity.” Consequently, he asks us to pray for the victims, “that they may be protected by society and have their sufferings considered and heeded by all.”

This month’s Pope Video seeks to make the drama of this issue visible also through narration with images. Thanks to the collaboration of Hermes Mangialardo—an Italian creative who has won international prizes and is a professor of animation design—the video represents, through animated illustrations, the story of a woman who is the victim of violence, who finds courage to escape from the tunnel of abuse thanks to her own strength and to the help of the community.

Violence against women, in numbers

“It’s shocking how many women are beaten, insulted, and raped,” says the Holy Father in The Pope Video. Indeed, the statistics compiled by UN Women, updated in November of 2020, are stunning: each day, 137 women are killed by members of their own family; adult women make up nearly half of the victims of human trafficking identified worldwide; and globally, one in three women have experienced physical or sexual violence at some point (and 15 million adolescent girls worldwide aged 15 to 19 have experienced forced sexual relations). What’s more, last year there was the aggravating factor of the pandemic: the restriction of movement, social isolation and economic insecurity made women globally even more vulnerable to violence in private environments.

In his February message, the Pope asks for society to protect these victims. Although at least 155 countries have approved domestic violence laws and 140 have legislation regarding workplace sexual harassment, to give two examples, this does not mean that these laws always conform with international norms and recommendations, nor that they are applied and enforced.

Do not look the other way

Fr. Frédéric Fornos S.J., International Director of the Pope’s Worldwide Prayer Network, made the following observation about this intention: “The Holy Father’s call is very clear: ‘We must not look the other way.’ That is to say, we cannot stand by with our arms crossed in the face of so many cases of violence against women, which takes many forms, from the most visible and reprehensible to the most insidious and unconscious; in all cases, it is the product of deep-rooted mental frameworks and cultural and social paradigms that undervalue women. This is what we see in the Gospel, in the passage of the adulteress, for example: she was accused by all, but Jesus gave her a new life (John 8:2-11). Violence against women in all its forms cries out to heaven. Francis has said this several times: ‘Every form of violence inflicted upon a woman is a blasphemy against God, who was born of a woman. Humanity’s salvation came forth from the body of a woman: we can understand our degree of humanity by how we treat a woman’s body.’

Let us pray together for all women who are victims of violence, including children and adolescents, and let us fight for a more just society, so that it will protect them, listen to them, and alleviate their suffering.”

adminFEBRUARY: For women who are victims of violence01.31.2021