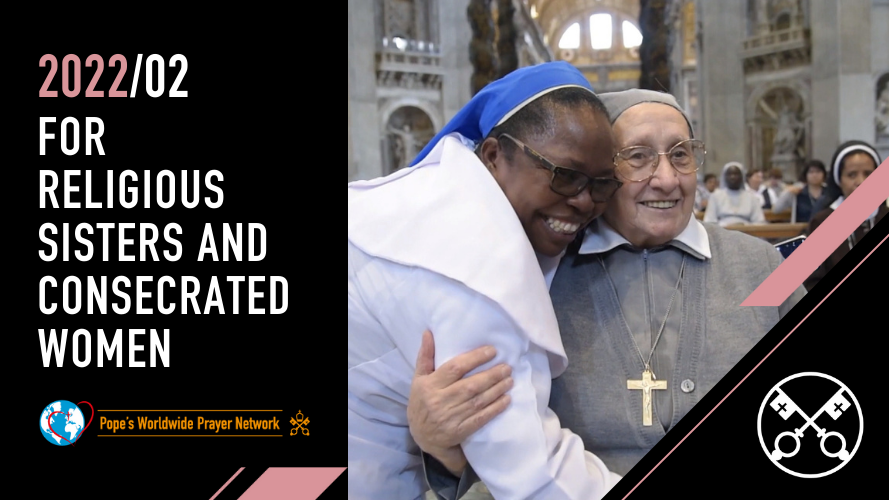 We pray for religious sisters and consecrated women; thanking them for their mission and their courage; may they continue to find new responses to the challenges of our times.

This month, we will pray in a special way for religious sisters and consecrated women.
What would the Church be without religious sisters and consecrated laywomen? The Church cannot be understood without them.
I encourage all consecrated women to discern and choose what is best for their mission in the face of the world’s challenges that we’re experiencing.
I exhort them to keep working and to have an impact with the poor, with the marginalized, with all those who are enslaved by traffickers; I especially ask them to make an impact on this.
And let us pray that they may show the beauty of God’s love and compassion as catechists, theologians, and spiritual guides.
I invite them to fight when, in some cases, they are treated unfairly, even within the Church; when they serve so much that they are reduced to servitude —at times, by men of the Church.
Do not be discouraged. May you keep making God’s goodness known through the apostolic works you do. But above all through your witness of consecration.
Let us pray for religious sisters and consecrated women, thanking them for their mission and their courage; may they continue to find new responses to the challenges of our times.
Thank you for what you are, for what you do, and for how you do it.

The Pope Video – February 2022: For religious sisters and consecrated women

Pope Francis to women religious: “Thank you for you who are, for what you do, and for how you do it.”

(Vatican City, February 1, 2022) – The Pope Video for February has just been released with the prayer intention that Francis entrusts to the entire Catholic Church through the Pope’s Worldwide Prayer Network. This month, the Holy Father expresses his gratitude for the mission and courage of religious sisters and consecrated women, and asks for prayers for them that they may “continue to find new responses to the challenges of our times.”

In this video, made with the support and collaboration of the International Union of Superiors General (UISG), which brings together more than 1,900 religious congregations, Francis reaffirms the role of women who dedicate themselves to consecrated life. His message is forceful: “What would the Church be without religious sisters and consecrated laywomen? The Church is unintelligible without them.”

According to statistics published by the Fides news agency in 2021, there are more than 630,000 women religious throughout the world.

Preferential option for the poor and marginalized

In continuity with the message that he has repeated on innumerable occasions throughout his pontificate, Francis asks religious sisters and consecrated women to center their apostolic work on having “an impact with the poor, with the marginalized, with all those who are enslaved by traffickers.”

The Pope Video this month, with videos and photographs, tells the story of their complete commitment: among native peoples, at the side of street children, in villages where food and medicine are lacking, among migrants and the unemployed, and at the side of victims of human trafficking. It does this without forgetting, however, their great intellectual and civil contribution: indeed, religious sisters and consecrated women teach at universities, participate in international summits on the environment, and mediate in situations of political crises.

Religious sisters and consecrated women in the life of the Church

In the Pope Video, Francis also recognizes that sometimes women religious are “treated unjustly, even within the Church.” For this reason, he calls them to fight against it and not to be discouraged; he asks them to keep showing “the beauty of God’s love and compassion as catechists, theologians, and spiritual guides” and “through the apostolic works they do.”

Sr. Jolanta Kafka, President of the UISG, commented on the Pope Video: “We, as religious, feel very encouraged and called by Pope Francis, both in our community life and in the challenges we face today in our mission. To his invitation to pray for the religious sisters and consecrated women of the world, we join prayer for all the women, men, and children, and especially young people whom we encounter each day in our ministry. We share with them the dynamism of the vocation to which we are called, to participate in the joy of the Gospel and in hope, in a world where we are all brothers and sisters. With UISG, we feel the responsibility to respond to Pope Francis’ words, to continue with courage and joy our mission to bear witness to the beauty of consecration: giving ourselves totally for the Kingdom, following Jesus’ example.”

On his part, Fr. Frédéric Fornos, S.J., International Director of the Pope’s Worldwide Prayer Network, added: “The hundreds of thousands of religious sisters and consecrated women contribute an incalculable value to the life and mission of the Church throughout the world. I received all of my formation with religious sisters and I have worked with many of them, as well as with consecrated women, on pastoral, educational, and social proposals to respond to the challenges of today’s world. They form part of my best experiences in my mission. I also received my formation with numerous lay men and women, who give themselves generously in the mission; nevertheless, it’s very different to work with religious sisters, with whom, as a Jesuit, I share a lifestyle and a similar perspective at the service of the Gospel and of the promotion of the justice of the Kingdom of God. Not to mention the many religious sisters who also taught me theology and the Bible, or contributed to my formation through spiritual accompaniment. This month is a good occasion for all of us to get to know them better in their diversity, and to discover their contribution to the mission of the Church and the challenges of our time.”

About the International Union of Superiors General (UISG)

The International Union of Superiors General was created in 1965, inspired by the Second Vatican Council, to promote more profound collaboration among congregations of women in the apostolic religious life. Currently, the UISG is composed of more than 1,900 Superiors General throughout the world, organized in 36 constellations. As an international organism rooted in Christ and representing congregations of women religious throughout the world, the UISG seeks to bear witness to and proclaim the identity of apostolic religious life in all its diversity. Weaving global solidarity and opening new frontiers, we encourage, support, and stimulate the leadership of religious to be a prophetic voice and a testimony in the Church and in the world. The UISG maintains relationships with various Departments of the Holy See, especially with the Congregation for Institutes of Consecrated Life and Societies of Apostolic Life (CICLSAL). More information at: uisg.org.