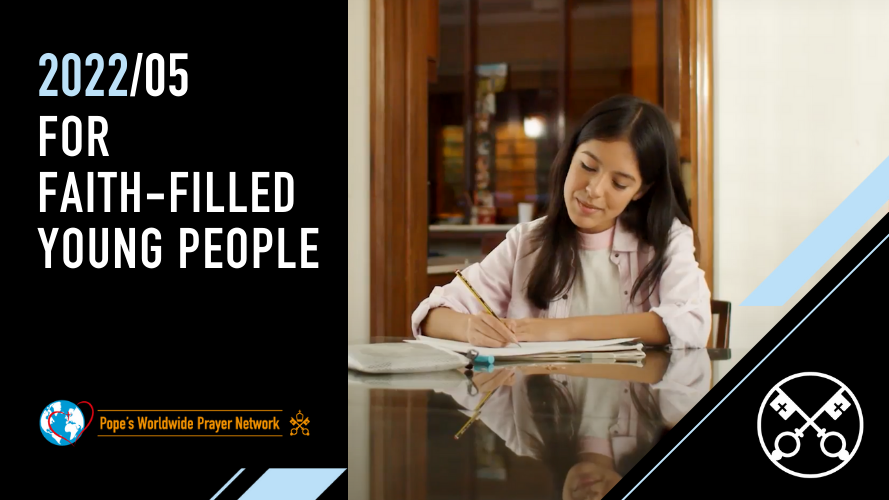 The Pope Video – May 2022: For Faith-Filled Young People

The Pope asks young people to listen, to be courageous, and to serve

(Vatican City, May 3, 2022) – The Pope Video for May has just been released with the prayer intention that Francis is entrusting to the entire Catholic Church through the Pope’s Worldwide Prayer Network. This month, the Holy Father speaks to young people and invites them to “see in Mary’s life the way to discover in Mary’s life the way to listen, the depth of discernment, the courage of faith, and dedication to service.”

The importance of listening

In addition to the Virgin Mary’s example, the Pope recommends to young people that, in their process of discernment, they listen “to the words of their grandparents,” since in them “you will find a wisdom that will take you beyond the issues of the moment.” However, young people must also be listened to. “We need to make more room for the voices of young people to be heard,” Francis insists in his apostolic Exhortation Christus vivit. The Dicastery for Laity, Family, and Life responded to this petition of the Holy Father in 2019 when it established an international youth advisory body to foster their participation and shared responsibility in local Churches. The Pope Video for May was created precisely in collaboration with this Dicastery: it is the first in a triptych of prayer intentions, the other protagonists of which will be the family in June and the elderly in July.

The message for May also insists on service, in such a way that discernment must have a positive impact on others. Francis invites young people to be courageous and to decide to say “yes” to the Lord just like Mary, who took the risk to put everything on the line, changing her life to follow him. “You young people, who want to build a better world, follow her example,” the Holy Father insists.

Mary’s example for young people, to which Pope Francis refers in this video, is underlined by Fr. João Chagas, the head of the Youth Office of the Dicastery for Laity, Family and Life: “The theme of the next intercontinental pilgrimage of young people—the WYD in Lisbon in 2023—will be Marian: ‘Mary arose and went with haste’ (Lk 1:39). The entire path of preparation for this event is an invitation to young people to arise and to help the world to do the same. In his most recent message to young people, the Holy Father invited them: Let us ‘help one another to arise together and, at this troubled time in our history, we will become the prophets of a new and hope-filled future! May the Blessed Virgin Mary intercede for all of us.’ (Pope Francis, Message for the XXXVI World Youth Day).”

Fr. Frédéric Fornos, S.J., International Director of the Pope’s Worldwide Prayer Network—a pontifical foundation with a youth section, the Eucharistic Youth Movement—pointed out that since the beginning of his pontificate Pope Francis has emphasized the importance of a new understanding between generations, in particular between grandparents and grandchildren. He commented: “It’s not by chance that Francis likes to cite often the prophet Joel: ‘Then afterward I will pour out my spirit upon all mankind. Your sons and daughters shall prophesy, your old men shall dream dreams, your young men shall see visions’ (Joel 3:1; see Acts 2:17). With his prayer intention for this month, in the context of the Synodal process, Pope Francis is focusing on forming young people in discernment. How can we help young people, following Mary’s example, to listen, to discern, to recognize the Lord’s calls and to serve in today’s world? Here, the elderly surely play their role; they can help them in this task. Let us pray together for this prayer intention.”