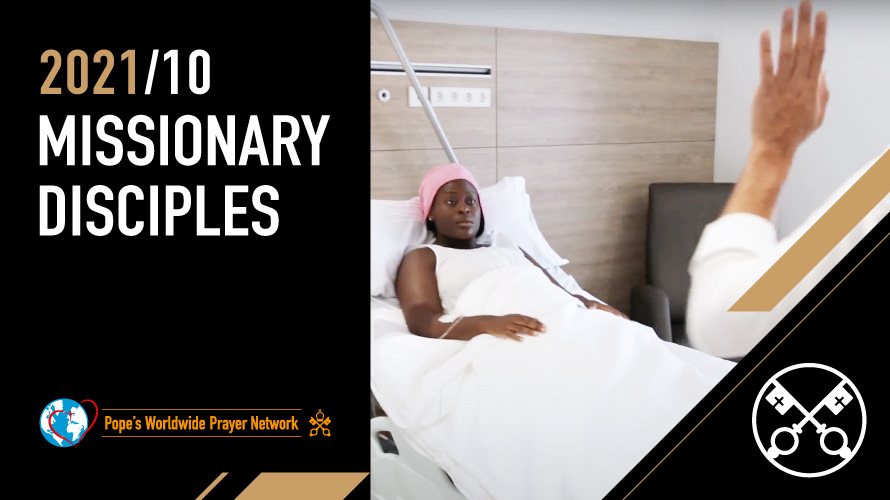 We pray that every baptized person may be engaged in evangelization, available to the mission, by being witnesses of a life that has the flavour of the Gospel.

Jesus asks us all, and you as well, to be missionary disciples. Are you ready?
It’s enough to be available to answer His call and to live united to the Lord in the most common daily things —work, meeting other people, our daily duties, the chance events of each day— allowing ourselves to be guided always by the Holy Spirit.
If Christ moves you, if you do things because Christ is guiding you, others will notice it easily.
And your testimony of life will inspire admiration, and admiration inspires others to ask themselves, “How is it possible for this person to be this way?,” “What is the source of the love with which this person treats everyone —the kindness and good humor?”
Let us remember that the mission is not proselytism; the mission is based on an encounter between people, on the testimony of men and women who say, “I know Jesus, and I’d like you to know Him too.”
Brothers and sisters, let us pray that every baptized person may be engaged in evangelization, available to the mission, by being witnesses of a life that has the flavour of the Gospel.

Pope Francis calls Christians to bear witness with their lives in a way that attracts, without demanding or forcing

In The Pope Video for October, Pope Francis asks all people to be missionary disciples in their everyday life, in their daily work, bearing witness to their encounter with Jesus and living with the flavor of the Gospel.

(Vatican City, September 30, 2021) – The Pope Video was just released, with the prayer intention that Francis is entrusting to the entire Catholic Church through the Pope’s Worldwide Prayer Network. In October, the month during which the synodal process begins and World Mission Day is celebrated, the Holy Father explores in depth the evangelizing nature of the church and calls us all to be precisely missionary disciples.

This mission, to which all the baptized are called, is centered above all on being “available to answer His call and to live united to the Lord in the most common daily things—work, meeting other people, our daily duties, the chance events of each day—allowing ourselves to be guided always by the Holy Spirit.”

In a few days, the Synodal Process of the Church will begin, a call to walk together, as the “pilgrim and missionary People of God.” In The Pope Video for August 2021, Pope Francis already emphasized the Church’s specific vocation, which is evangelization. On that occasion, he advocated the Church following a “more missionary option,” which begins with “a reform of ourselves.”

This month, the Pope goes deeper into that call, inviting men and women to allow themselves to be “moved” by Christ and thus to bear testimony of a life that infects others, that attracts without forcing or demanding. In the video, he tells us that every testimony of life inspires admiration, and admiration inspires others to ask, “How is it possible for this person to be this way?” or “What is the source of the love with which this person treats everyone—the kindness and good humor?”

Being a missionary means seeking out and fostering personal, face-to-face encounters, person to person. In the book-interview “Without Him We Can Do Nothing: a Conversation about Being Missionaries in Today’s World,” which documents a conversation between Pope Francis and Italian journalist Gianni Valente, the Holy Father says clearly that “the Church grows by attraction and by witness.” It’s a matter of living near to Jesus, encountering others: “If you have been attracted by Christ, if you move and do things because you are attracted by Christ, others will notice it without effort. There is no need to prove it, let alone flaunt it.” It’s about incarnating the Gospel in daily life, being a fire that ignites another fire.

“A synodal Church cannot be other than a missionary Church, because the mission necessarily starts with that dynamism of mutual listening which is the premise and condition for accepting what the Spirit is suggesting to the Church,” says the Secretary General of the Synod of Bishops, Cardinal Mario Grech. “Only by praying and opening our eyes to all that surrounds us—as Pope Francis reminds us—will it be possible to perceive the action of the Spirit, which is already operative, and be a Church on the move, a missionary Church that avoids self-referentiality and is able to be for all people that ‘sacrament of care’ which the world needs so greatly.”

Discern and recognize the action of the Holy Spirit

Fr. Frédéric Fornos S.J., International Director of the Pope’s Worldwide Prayer Network, explains that “the Pope’s intentions, which are presented each month, are part of the Holy Father’s prayer and discernment. These prayer intentions, in the context of the Synodal Process that the Church is beginning, as the People of God, are an invitation to discern and recognize how the Spirit of the Lord is calling us to face the challenges facing humanity and the mission of the Church. Let us not forget that the Synodal Process is in view of the mission, of a missionary Church ‘whose doors are open’ (EG, n.46) and which finds its source in prayer.”