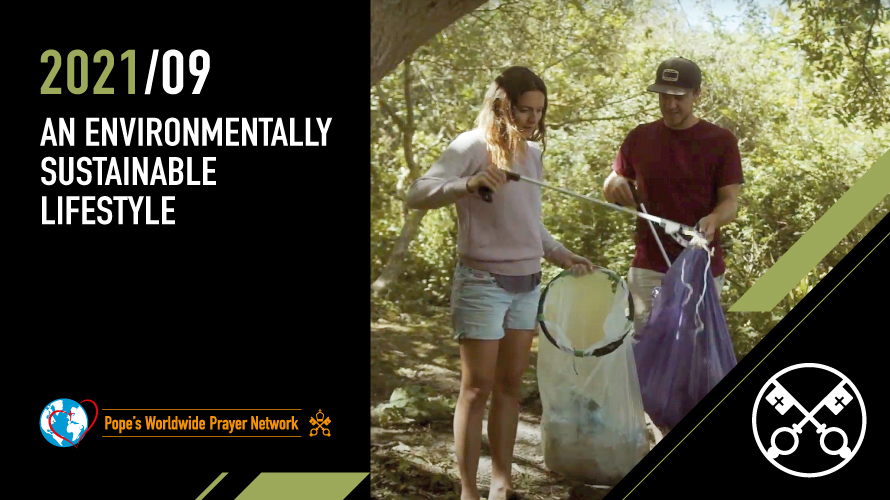 We pray that we all will make courageous choices for a simple and environmentally sustainable lifestyle, rejoicing in our young people who are resolutely committed to this.

It makes me very happy to see that young people have the courage to undertake projects for environmental and social improvement, since the two go together.
We adults can learn much from them, because in all matters related to care for the planet, they are at the forefront.
Let us take advantage of their example and reflect on our lifestyle, especially during these moments of health, social and environmental crisis.
Let us reflect on how the way we eat, consume, travel, or the way we use water, energy, plastics, and many other material goods, is often harmful to the earth.
Let us choose to change! Let us advance with young people towards lifestyles that are simpler and more respectful of the environment.
Let us pray that we all will make courageous choices, the choices necessary for a simple and environmentally sustainable lifestyle, taking inspiration from our young people who are resolutely committed to this. And they aren’t foolish, because they are committed to their own future. This is why they want to change what they will inherit at a time when we will no longer be here.

Off the Fence Productions

In the new Pope Video for September, Francis issues an urgent exhortation for us to question our lifestyles and the way we use the planet’s resources, in order to propose a change based on responsible care, respect, simplicity, and austerity.

(Vatican City, September 2, 2021) –  The Pope Video has just been published with the prayer intention that Francis is entrusting to the entire Catholic Church through the Pope’s Worldwide Prayer Network. In this month of September, the month of the Season of Creation, the Holy Father addresses once again the environmental crisis humanity is traversing. Emphasizing how “young people have the courage to undertake projects for environmental and social improvement,” he calls us to question the way we live and how we use the material goods of the planet—“often harmful to the Earth”—and he asks us to change, advancing “towards lifestyles that are simpler and more respectful of the environment.” This edition of The Pope Video has the support of BIP, one of the principal consultancies in Europe with more than 3,500 employees throughout the entire world.

The human root of the ecological crisis

The need for urgent action to combat the social and environmental crisis isn’t anything new; there are more and more global alerts to try to raise the awareness of humanity that something must change. Last June, the UN warned that the planet is “rapidly reaching a ‘point of no return’” and that we’re facing “the triple environmental threat of biodiversity loss, climate disruption and escalating pollution.” This impacts the lives of all: “Our degradation of the natural world is (…) already undermining the well-being of 3.2 billion people – or 40 per cent of humanity.” António Guterres, Secretary-General of the UN, added that “for too long, humanity has cut down the Earth’s forests, polluted its rivers and oceans, and ploughed its grasslands into oblivion. We are ravaging the very ecosystems that underpin our societies.”

But as Francis already had written in Laudato si´, “It would hardly be helpful to describe symptoms without acknowledging the human origins of the ecological crisis.” This is why it is imperative, first of all, that we reflect on the lifestyle we lead, to see to what extent our actions harm the planet: “Especially during these moments of health, social and environmental crisis,” Francis says in The Pope Video, let us “reflect on our lifestyle. Let us reflect on how the way we eat, consume, travel, or the way we use water, energy, plastics, and many other material goods, is often harmful to the Earth.”

Change the world with the courage of the young

“Let us choose change,” is the Holy Father’s petition. He centers his gaze on young people when he thinks of this change, since he considers them to be on the forefront of ecological issues, and says they are the ones who “have the courage to undertake projects for environmental and social improvement.”

The Pope’s message is also shared by BIP, the company that is supporting this month’s video. Its chairman, Nino Lo Bianco, explains why: “Our mission as a company is to aspire to sustainable and integrating economic growth that values and protects our planet. We’ve decided to support Pope Francis’ message to all of humanity because we’re firmly committed to participating actively in the development of solutions and activities oriented towards improving and administrating a positive impact on communities and the environment through our work.”

On his part, Fr. Fréderic Fornos, S.J., International Director of the Pope’s Worldwide Prayer Network, commented: “Once again, Francis’ words cannot leave us indifferent. In the face of the ecological crisis, it is urgent that we change our lifestyle to make it reflect simplicity and solidarity. Are we aware of this urgency? When the Pope speaks to us of integral ecology, he’s telling us that everything is interconnected in our lives. Words are no longer enough to protect our common home. Let us pray that we will act with the courage of the young, to live a more austere and ecologically sustainable life that will ensure our future. In Laudato Si’, Francis proposes to us a path, a return to simplicity, to fraternity with Creation and those most in need.”

As in past years when Francis’ intentions were about the oceans (2019) and the Earth’s resources (2020), the September edition of The Pope Video is part of the global and ecumenical celebration of the Season of Creation. In 2021, it takes place from September 1, the World Day of Prayer for the Care of Creation, until October 4, the feast of St. Francis of Assisi, the patron saint of the environment. In addition to the support of BIP, this video has the collaboration of the Dicastery for Promoting Integral Human Development and of the Laudato Si’ Movement (formerly the Global Catholic Climate Movement). The video was directed by Nicolas Brown (three-time Emmy winner) and co-produced for the Pope’s Worldwide Prayer Network by Vatican Media, Off the Fence Productions, and La Machi Communication for Good Causes.