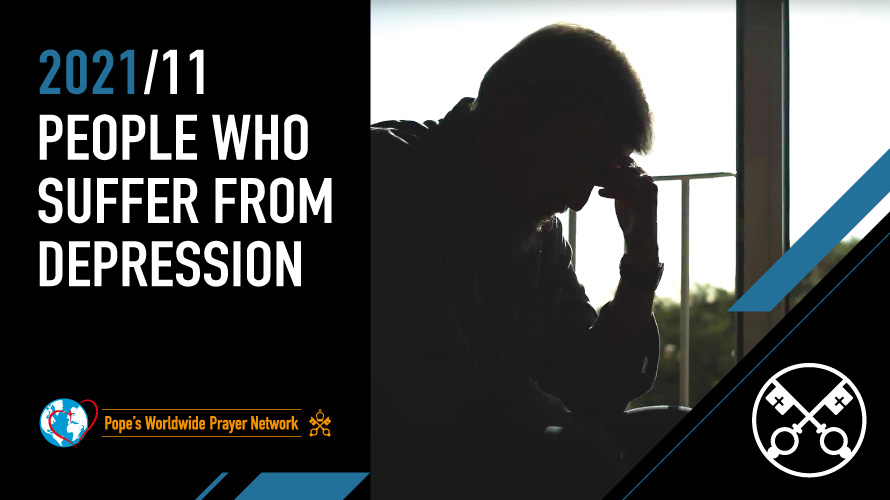 We pray that people who suffer from depression or burn‐out will find support and a light that opens them up to life.

Overwork and work-related stress cause many people to experience extreme exhaustion —mental, emotional, affective, and physical exhaustion.
Sadness, apathy, and spiritual tiredness end up dominating people’s lives, who are overloaded due to the rhythm of life today.
Let us try to be close to those who are exhausted, to those who are desperate, without hope. Often, we should just simply listen in silence, because we cannot go and tell someone, “No, life’s not like that. Listen to me, I’ll give you the solution.” There’s no solution.
And besides, let us not forget that, along with the indispensable psychological counseling, which is useful and effective, Jesus’ words also help. It comes to my mind and heart: “Come to me, all who labor and are heavy laden, and I will give you rest.”
Let us pray that people who suffer from depression or burn-out will find support and a light that opens them up to life.

The Pope Video – November 2021: People who suffer from depression

Stress, depression, and burnout: The Pope asks all to be close to those who are feeling overwhelmed

The Pope Video for November has been released, in which Pope Francis expresses his closeness to all those who are feeling overwhelmed in their daily life, above all those suffering from stress and depression, and he asks us to pray that they receive the help they need.

(Vatican City, November 3, 2021) – In the new Pope Video which has been recently released, Francis entrusts his prayer intention for the month of November to the entire Catholic Church through the Pope’s Worldwide Prayer Network. On this occasion, the Holy Father calls our attention to the stress and depression affecting many people. Aware that people around the world are going through times of mental, emotional, and affective exhaustion (in varying forms and degrees), the Pope asks that they be adequately accompanied, that we pray for them, and that Jesus’ closeness not be forgotten.

This edition of The Pope Video was created with the support of the Association of Catholic Mental Health Ministers, an association which offers spiritual support to people suffering some form of mental illness, and which fosters actions to prevent any kind of discrimination that would impede them from participating fully in the life of the Church.

Depression and anxiety: the most common mental health disorders

The message of Pope Francis’ prayer intention addresses a central issue in the lives of millions of people: mental health. In the video, he explains that in many cases, “sadness, apathy, and spiritual tiredness end up dominating people’s lives, which are overloaded due to the rhythm of life today.”

In fact, a study published this year estimates that about one in ten people worldwide lives with a mental health disorder—that is to say, about 792 million people, or 11% of the population. Among the various disorders that exist, the study identifies depression (264 million, 3%) and anxiety (284 million, 4%) as the most prevalent in people’s lives.

The UN in turn warns that when depression is recurrent and moderate or severe in intensity, it can become a serious health condition. In the worst-case scenario, it can lead to suicide, which currently takes the lives of more than 700,000 people every year and is the fourth leading cause of death among young people aged 15 to 29.

Mental health in times of COVID-19

The worldwide COVID-19 pandemic has caused the death of millions of people. It has also tried the mental and emotional resilience of countless people and has affected their psychological equilibrium. Sometimes, this has created situations of real anguish and despair. With this reality in view, the Holy Father asks that we “be close to those who are exhausted, to those who are desperate, without hope. Often, we should simply listen in silence.”

The Dicastery for Promoting Integral Human Development has drawn up a document directed to those who want to help accompany people who are suffering psychologically, above all due to the pandemic. It highlights some of the main causes, such as uncertainty about having a job in the future, which have affected mentally healthy people or have worsened serious mental disorders such as depression, panic attacks, and anxiety, among other related pathologies.

The Pope’s message is shared by the Association of Catholic Mental Health Ministers, a lay association of the Christian faithful founded in the United States, whose members are called to be a healing presence in the lives of people with mental illness. Its president, permanent deacon Ed Shoener, explained the need to respond to Pope Francis’ call: “Our mission is to support the growth of mental health ministry in the Church. Pope Francis has said that we need to fully overcome the stigma with which mental illness has often been branded in order to ensure that a culture of community prevails over the mentality of rejection. We are committed to following the Pope’s call to build a community of warmth and affection where people who live with depression and other mental health challenges can find hope and healing”.

Jesus’ words: “Come to me, all you who are heavy laden.”

Fr. Frédéric Fornos, S.J., International Director of the Pope’s Worldwide Prayer Network, commented on this intention: “Our societies, with their rhythm of life and their ever-faster technologies, foster depression and the syndrome of exhaustion and stress known as burnout. The pandemic has increased the suffering of many people. Francis asks us to pray and to be close to those who suffer extreme mental, emotional, and physical exhaustion. Psychological accompaniment is needed; however, he reminds us that Jesus’ words also help, offering consolation and care: ‘Come to me, all who labor and are heavy laden, and I will give you rest.’ This is also the advice of Evagrius Ponticus, a 4th-century Desert Father called the ‘scrutinizer of the soul,’ who identified eight sicknesses of the soul, and proposed paths of life, meditating on the Word of God.”

adminNOVEMBER | People who suffer from depression11.03.2021