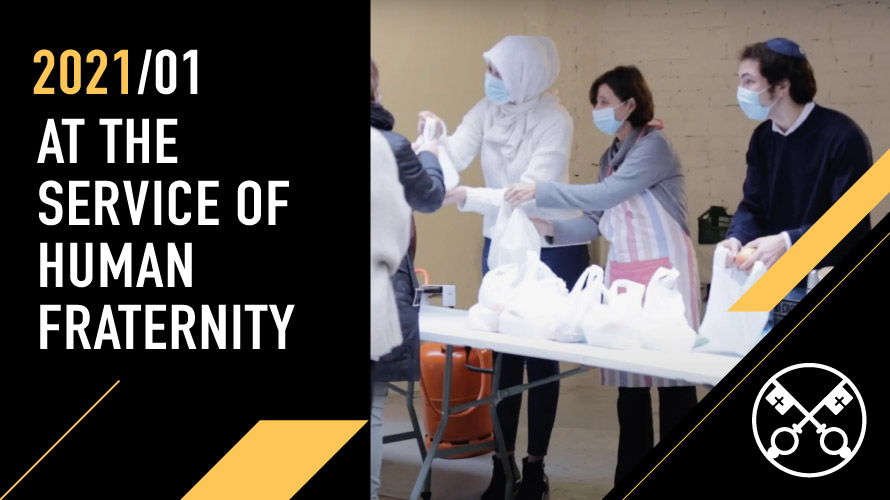 Let us pray that the Lord may give us the grace to live in full fellowship with our brothers and sisters of other religions and not fight each other, and praying for one another, open ourselves to all.

When we pray to God following Jesus, we come together as brothers and sisters with those who pray according to other cultures, other traditions and other beliefs.
We are brothers and sisters who pray.
Fraternity leads us to open ourselves to the Father of all and to see in the other a brother or sister, to share our lives or to support, to love, and to know each other.
The Church values God’s action in other religions, without forgetting that for us Christians, the wellspring of human dignity and fraternity, is in the Gospel of Jesus Christ.
We believers must return to our sources and concentrate on what is essential. What is essential to our faith is the adoration of God and love of neighbor.
Let us pray that the Lord may give us the grace to live in full fellowship with our brothers and sisters of other religions and not fight each other, and praying for one another, open ourselves to all.

The Pope Video – January 2021: At the service of Human fraternity

The Pope opens 2021 with a call to fraternity: “See in the other a brother or sister”

The first Pope Video of 2021 is centered on human fraternity. The Holy Father calls for people of different religions, cultures, traditions and beliefs to return to the essential: love of neighbor.

At the service of fraternity

(Vatican City, January 5, 2021) – The Pope Video for January, the first one in 2021, was just released with the prayer intention that Francis is entrusting to the entire Catholic Church through the Pope’s Worldwide Prayer Network (which includes the Eucharistic Youth Movement – EYM). The message chosen to open the year 2021 is dedicated to human fraternity: in response to all the challenges facing humanity, the Holy Father asks that we open ourselves to each other and unite, as human beings and as brothers and sisters, “with those who pray according to other cultures, other traditions and other beliefs.” As he has said on other occasions, “There is no alternative: we will either build the future together or there will not be a future. Religions, in particular, cannot renounce the urgent task of building bridges between peoples and cultures.”

Sons and daughters of the same Father

The path towards fraternity proposed by The Pope video starts with openness “to the Father of all,” and with seeing “in the other a brother or sister.” He had already advanced this idea in his latest encyclical, Fratelli tutti: “We are certain that ‘only with this awareness that we are not orphans, but children, can we live in peace with one another.’” For the Pope, the differences among people who profess different religions or who live according to other traditions should not impede achieving a culture of encounter, since after all, “we are brothers and sisters who pray.”

The essential of our faith

Religions at the service of fraternity in the world

Fr. Frédéric Fornos S.J., International Director of the Pope’s Worldwide Prayer Network, highlighted the importance of this prayer intention that inaugurates 2021: “After a 2020 marked by the impact of the pandemic, on both the sanitary and socioeconomic levels, it’s especially important that this intention of the Holy Father help us to see each other more truly as brothers and sisters on the path towards peace, which becomes more necessary each day. For Francis, the role of religions in achieving this goal is fundamental. He took a great step in this direction when he signed the Document on Human Fraternity for World Peace and Living Together, along with the Grand Imam of Al-Azhar, Ahmad Al-Tayyeb. A little more than a year later, he developed his ideas more deeply in his latest encyclical, Fratelli tutti, especially in chapter 8: ‘The different religions, based on their respect for each human person as a creature called to be a child of God, contribute significantly to building fraternity and defending justice in society.’ May we, in the name of the God who created all of us with equal rights, duties and dignity, and who has called us to live together as brothers and sisters, foment this fraternity so we may face together the challenges of the world and of our ‘common home.’ Fraternity, which respects and values diversity, is the style of the Kingdom of God.”

adminJANUARY: At the service of Human fraternity12.31.2020