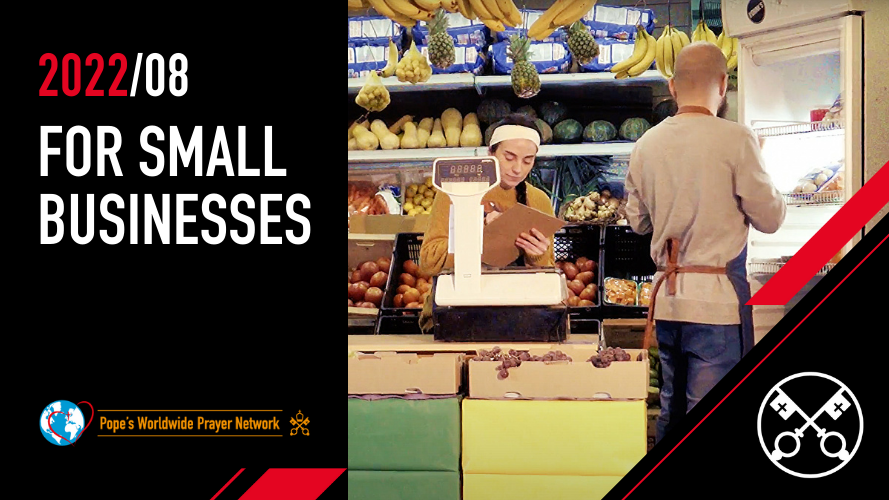 We pray for small and medium-sized businesses; in the midst of economic and social crisis, may they find ways to continue operating, and serving their communities.

As a consequence of the pandemic and the wars, the world is facing a grave socio-economic crisis. We still don’t realize it!
And among those most affected are small and medium-sized businesses.
Stores, workshops, cleaning businesses, transportation businesses, and so many others.
The ones that don’t appear on the world’s richest and most powerful lists, and despite the difficulties, they create jobs, fulfilling their social responsibility.
The ones that invest in the common good instead of hiding their money in tax havens.
They all dedicate an immense creative capacity to changing things from the bottom up, from where the best creativity always comes from.
With courage, with effort, with sacrifice, they invest in life, creating wellbeing, opportunities, and work.
Let us pray for small and medium-sized businesses, hard hit by the economic and social crisis, so they may find ways to continue operating, and serving their communities.

The Pope highlights the “courage, effort and sacrifice” of small and medium-sized entrepreneurs

(Vatican City, August 2, 2022) – The Pope Video for August has just been released with the prayer intention that Francis is entrusting to the entire Catholic Church through the Pope’s Worldwide Prayer Network. This month, the Holy Father prays “for small and medium-sized businesses; in the midst of economic and social crisis, may they find ways to continue operating, and serving their communities.”

The crisis we are experiencing

“As a consequence of the pandemic and the wars, the world is facing a grave socio-economic crisis,” says the Pope, who points out that small and medium-sized businesses are among those most affected. According to statistics for 2021 from the World Bank, one in four companies lost half of their volume of sales because of the global pandemic. In addition, public assistance is weakest precisely where it is most needed: in poor countries and for small businesses.

In this context, Pope Francis praises those who “with courage, with effort, with sacrifice, (…) invest in life, creating wellbeing, opportunities, and work.” Among small and medium-sized businesses are those than run a store, a restaurant, or a workshop. It also includes those dedicated to cleaning or transportation, and to craftsmen, among others. They “don’t appear on the lists of the richest and most powerful, and despite the difficulties, they create jobs, fulfilling their social responsibility”.

Fr. Frédéric Fornos, S.J., International Director of the Pope’s Worldwide Prayer Network, commented on this intention: “The crises that we are going through, are—as the Pope says—a ‘Noah moment,’ an opportunity to build something different. In this sense, small and medium-sized businesses are of great importance, with their creative force and their capacity to contribute solutions from the bottom up. Without them, it would not have been possible to make it through the COVID crisis, and they continue to be necessary now. This is why it is important to pray for them”.

The Pope Video is an official global initiative with the purpose of disseminating the Holy Father’s monthly prayer intentions. It is carried out by the Pope’s Worldwide Prayer Network (Apostleship of Prayer). Since the year 2016, The Pope Video has had more than 179 million views across all the Vatican’s social networks, and is translated into more than 23 languages, receiving press coverage in 114 countries. The videos are produced and created by the team of The Pope Video of the Prayer Network, coordinated by Andrea Sarubbi, with the support of La Machi Communication for Good Causes agency. The project is supported by Vatican Media. More information at: The Pope Video 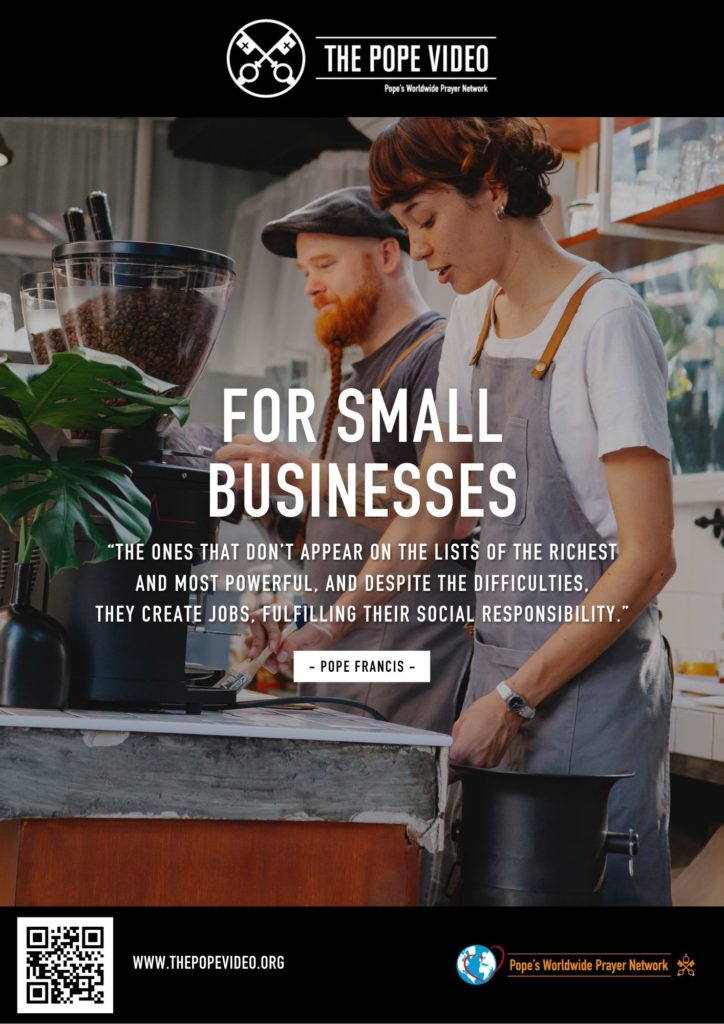 Small businesses, Small and medium-sized businesses, Businesspeople, Who has gotten us out of the crisis, Affected by the crisis.