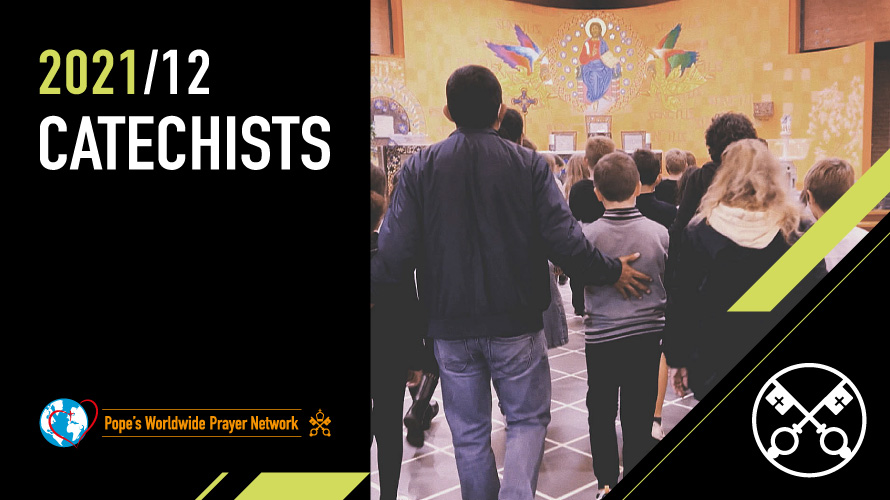 Let us pray for the catechists, summoned to announce the Word of God: may they be its witnesses, with courage and creativity and in the power of the Holy Spirit.

Catechists have an invaluable mission for the transmission and growth of the faith.
The lay ministry of catechist is a vocation; it’s a mission. Being a catechist means that you ‘are a catechist,’ not that you ‘work as a catechist.’ It’s an entire way of being, and we need good catechists who are both companions and teachers.
We need creative people who proclaim the Gospel, but who proclaim it neither with a mute nor with a loudspeaker, but rather with their life, with gentleness, with a new language, and opening new ways.
In many dioceses, on many continents, evangelization is fundamentally in the hands of a catechist.
Let us thank catechists for the interior enthusiasm with which they live this mission at the service of the Church.
Let us pray for the catechists, summoned to announce the Word of God: may they be its witnesses, with courage and creativity and in the power of the Holy Spirit, with joy and much peace.

For Pope Francis, what does it mean to be a catechist?

In the last Pope Video of 2021, Pope Francis centers his message on the ministry, mission and vocation of catechists, thanking them for their enthusiasm for transmitting the faith, and encouraging them to proclaim the Gospel with new languages and in new ways.

(Vatican City, November 30th, 2021) – In the new Pope Video, Francis entrusts to the entire Catholic Church through the Pope’s Worldwide Prayer Network his prayer intention with which he chooses to end the year. In this month of December, the Holy Father dedicates his message to catechists, recognizing their work as an authentic mission and ministry at the service of the mission of the Church. The Pope points out that it’s truly a vocation, since “being a catechist means that you ‘are a catechist,’ not that you ‘work as a catechist.’”

In these times when the world is undergoing many changes, Francis expresses his gratitude for the enthusiasm of those baptized people who transmit the faith with constant effort and joy. At the same time, he encourages them to continue proclaiming the Gospel “with their life, with gentleness, with a new language, and opening new ways.”

An example of a new language for catechesis is found in The Pope Video for this month, which shows catechists and young people working together on a mural. With spray paint and buckets of paint, dozens of children and adolescents—accompanied by their catechists—help Italian artist Paolo Colasanti (whose artistic name is Gojo) to produce a creative rendition of the scene of the washing of the feet, on a wall of the youth center at the Roman parish of Our Lady of Coromoto.

The catechist: a very ancient ministry?

In May of this year, Francis had already made great gestures towards catechists by instituting their lay ministry with the Motu Proprio Antiquum ministerium. As 2021 draws to a close, the Holy Father is ratifying this form of service, which has continued throughout the history of the Church and which, he explains, is “a vocation; it’s a mission.” Still today, he explains in The Pope Video, we can see how “in many dioceses, on many continents, evangelization is fundamentally in the hands of a catechist.” For this reason, “we need good catechists who are both companions and teachers.”

Being a catechist, the Holy Father teaches, is not a job; rather, it’s about teaching patiently, accompanying, proclaiming the joy of the Gospel “not with a loudspeaker” but with one’s own life, with gentleness, with courage and creativity.

Fr. Frédéric Fornos, S.J., International Director of the Pope’s Worldwide Prayer Network, commented on this intention: “Francis dedicating this last message to catechists in the same year in which he instituted their lay ministry and in which the synodal journey began ‘as the pilgrim and missionary People of God’ is an eloquent gesture. As the preparatory document of the 16th General Ordinary Assembly of the Synod of Bishops says, the Holy Spirit, today as yesterday, continues to act in history: ‘It is precisely in the furrows dug by the sufferings of every kind endured by the human family and by the People of God that new languages of faith and new paths are flourishing, capable (…) of finding in trials the reasons for refounding the path of Christian and ecclesial life. (…) The recent institution of the lay ministry of Catechist and the opening of access to those of Lector and Acolyte to women also move in this direction’ (No. 7). Let us pray, then, ‘for the catechists, summoned to announce the Word of God: may they be its witnesses, with courage and creativity and in the power of the Holy Spirit.’”