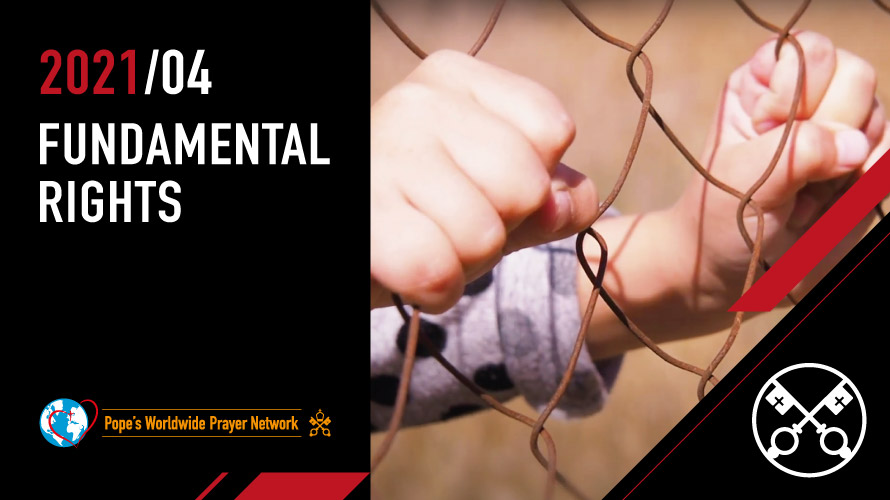 Let us pray for those who risk their lives while fighting for fundamental rights under dictatorships, authoritarian regimes and even in democracies in crisis, that they may see their sacrifice and their work bear abundant fruit.

Defending fundamental human rights demands courage and determination.
I’m referring to actively combatting poverty, inequality, the lack of work, land and housing, and the denial of social and labor rights.
Often, in practice, fundamental human rights are not equal for all.
There are first-, second-, and third-class people, and those who are disposable.
No. They must be equal for all.
In some places, defending people’s dignity can mean going to prison, even without a trial. Or it might mean slander.
Every human being has the right to develop fully, and this fundamental right cannot be denied by any country.
Let us pray for those who risk their lives while fighting for fundamental rights under dictatorships, authoritarian regimes and even in democracies in crisis, that they may see their sacrifice and their work bear abundant fruit.

POPE FRANCIS AGAINST POVERTY AND INEQUALITY: The Pope Video intention for April is for fundamental human rights

In his prayer intention for April, the Holy Father defends the right of all people in the world to integral development, and prays particularly for those who risk their lives fighting for fundamental rights.

(Vatican City, April 6, 2021) – This month of April, The Pope Video, which presents the prayer intention that Pope Francis is entrusting to the entire Catholic Church through the Pope’s Worldwide Prayer Network, deals with fundamental rights of all persons. Concretely, the Holy Father wants to emphasize not only “actively combatting poverty, inequality, the lack of work, land and housing, and the denial of social and labor rights,” but also those people who risk their lives every day to defend fundamental human rights in conflictive circumstances of every kind.

The images of The Pope Video for April seek to reflect the exercise of these fundamental rights—through the hands of countless men and women who work the land, who open doors, who heal, who eat, who study…—and the abuse of these same rights, seen in the hands of exploited children, and in the suffering hands of people imprisoned without a trial, among other critical situations. The video was made with the support of the Permanent Observer Mission of the Holy See to the United Nations and the AVSI Foundation, a non-profit organization which implements development and humanitarian aid projects in 33 countries.

When we speak of fundamental human rights, we are referring to rights that belong to all people, basically for the very fact that they exist as human beings. They are inherent in all people, regardless of their nationality, sex, ethnic or national origin, skin color, religion, language or any other condition. The Universal Declaration of Human Rights, adopted by the General Assembly of the United Nations in 1948, was the first legal document to establish universal protection of fundamental human rights.

The teachings of the Church: rights due every person as such

In the Church as well, since Pope John XXIII in the decade of the 1960s, human rights have had central importance in Catholic social teaching and practice. As Card. Michael Czerny, S.J., wrote in a recent article: “When St. John XXIII enumerated the fundamental rights in his 1963 encyclical Pacem in Terris, he began with the ones that today are considered economic. ‘Man has the right to live,” he says. “He has the right to bodily integrity and to the means necessary for the proper development of life, particularly food, clothing, shelter, medical care, rest, and, finally, the necessary social services.’ Today, Pope Francis is making the same emphasis, underlining above all the rights to work, to shelter, land and food security: ‘land, housing and work.’”

For his part, Fr. Fréderic Fornos, S.J., International Director of the Pope’s Worldwide Prayer Network, added: “It’s not the first time that Pope Francis has insisted on the importance of people’s fundamental rights. In his latest encyclical, Fratelli tutti, he denounced the fact that, ‘While one part of humanity lives in opulence, another part sees its own dignity denied, scorned or trampled upon, and its fundamental rights discarded or violated’ (FT, 22). Pope Francis asks us this month to pray for ‘those who risk their lives while fighting for fundamental rights under dictatorships, authoritarian regimes and even in democracies in crisis.’ It’s an invitation to remember those men and women, in so many countries of the world, who continue to be in prison or in dangerous situations, or who have lost their life, and many of them in the name of their faith in Jesus Christ. Let us not forget them; let us pray for them.”

Gianpaolo Silvestri, Secretary General of the AVSI Foundation, said: “Since 1972, AVSI has been working for a world in which each person will be the protagonist of their own integral development and that of their community, including in emergency situations. This implies that the issue of protecting rights is transversal to all our activities, actions and projects. Last year, a dramatic one marked by the pandemic, has done nothing but make this urgency more manifest: we must not cede a single step in our commitment against inequality, continuing our response to the needs of the most vulnerable, with an integral approach. Care of the person, with its patrimony and rights, with its value that can never be reduced, must inspire every project of sustainable and lasting development, for the common good.”

Pray for those who defend fundamental rights

Let us accompany The Pope Video for April with prayer, while highlighting the courage and determination of those who fight every day so that these fundamental human rights may be equally recognized for all, although for some people that struggle means putting their own life at risk.