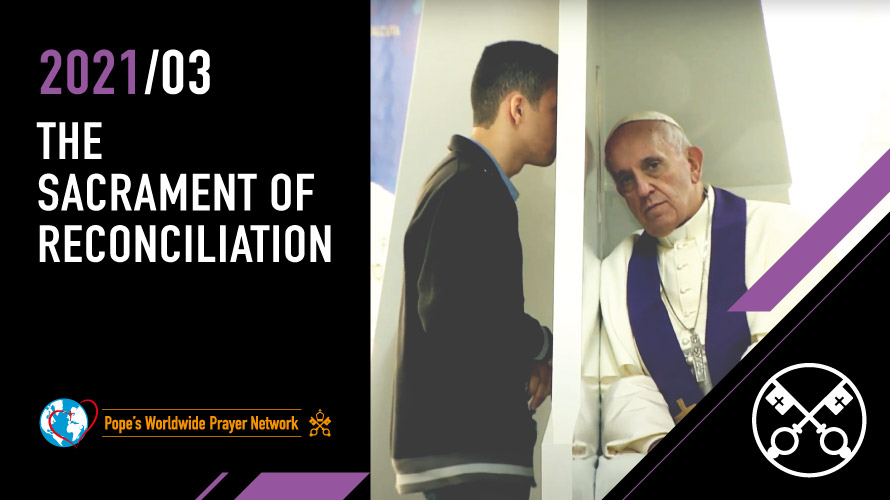 The Pope Video for March seeks to highlight the joy that the sacrament of reconciliation brings, and reminds us that it’s a loving and merciful encounter between God and ourselves.

(Vatican City, March 2, 2021) – The Pope Video for March has been released with the prayer intention that the Holy Father is entrusting to the entire Catholic Church through the Pope’s Worldwide Prayer Network. It’s a message full of hope, in which he invites us to rediscover the power of personal renewal that the sacrament of confession has in our life. “Let us pray that we may experience the sacrament of reconciliation with renewed depth, to taste the forgiveness and infinite mercy of God,” Francis asks. This month’s video opens with the Pope himself going to confession, “in order to be healed, to heal my soul.”

“Jesus waits for us, listens to us and forgives us”

“In the heart of God, we come before our mistakes,” says the Holy Father in The Pope Video, highlighting once more the power God’s love has over our being and action. Receiving this sacrament isn’t a matter of standing before a judge, but of going to a loving encounter with a Father who receives us and always forgives us. “The center of confession is not the sins we declare, but the divine love we receive, of which we are always in need,” Francis adds. And this love comes before all else, before our mistakes, the rules, judgments and failings.

Fr. Fréderic Fornos, S.J., International Director of the Pope’s Worldwide Prayer Network, pointed to Francis’ final words in the video: “Let us pray that God may give his Church merciful priests and not torturers.” And he added: “It’s not the first time that the Pope prays for this grace. As a good shepherd, he knows the people’s suffering, their sins, and their need to encounter ‘ministers of mercy.’ This is the time of mercy. In his apostolic letter Misericordia et misera, at the conclusion of the Extraordinary Jubilee of Mercy, he invited priests to be like Jesus, full of compassion and patient. It’s a path of conversion for each priest, to be ‘witnesses of fatherly tenderness,’ ‘far-sighted in discerning,’ and ‘generous in dispensing God’s forgiveness.’ He asks that their heart be close to the heart of Jesus, and it’s a grace.”

In the Angelus on this past February 14, the Holy Father asked that we thank and applaud merciful confessors. God never tires of forgiving. Let us pray, then, “that we may experience the sacrament of reconciliation with renewed depth, to taste the forgiveness and infinite mercy of God.”

The Pope Video is an official global initiative to disseminate the Holy Father’s monthly intentions. It is carried out by the Pope’s Worldwide Prayer Network (Apostleship of Prayer). Since the year 2016, The Pope Video has had more than 150 million views across all its social networks, and is translated into more than 20 languages, receiving press coverage in 114 countries. The project is supported by Vatican Media. More information at: The Pope Video

The Pope’s Worldwide Prayer Network is a Vatican foundation, with the mission of mobilizing Catholics through prayer and action in response to the challenges facing humanity and the mission of the Church. These challenges are presented in the form of prayer intentions entrusted by the Pope to the entire Church. The foundation’s mission is inscribed in the dynamic of the Heart of Jesus, a mission of compassion for the world. It was founded in 1844 as the Apostleship of Prayer. It is present in 98 countries and is made up of more than 35 million Catholics. It includes a youth branch, the EYM: Eucharistic Youth Movement. In December 2020, the Pope constituted this pontifical work as a Vatican foundation and approved its new statutes. Its international director is Fr. Frédéric Fornos, SJ. For more information, visit: https://www.popesprayer.va

admin“From misery to mercy”: for the Pope, confession is about God’s infinite mercy03.02.2021