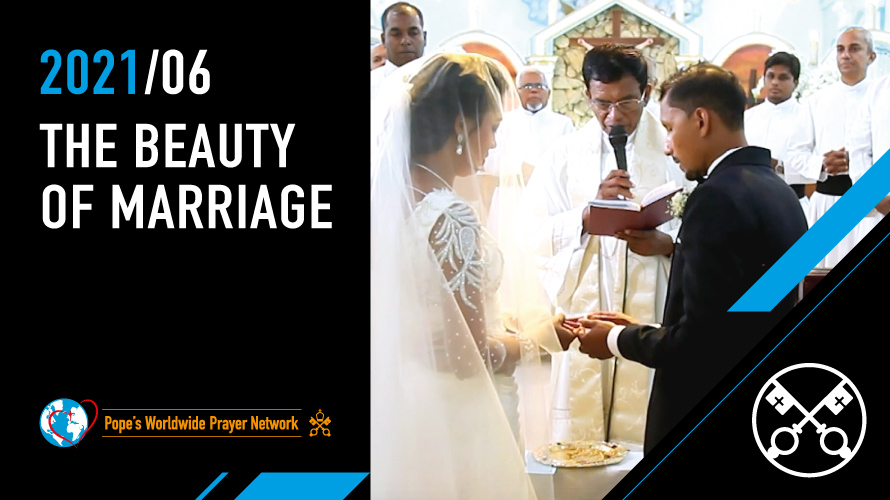 The Holy Father dedicates his prayer intention for the month of June to the beauty of marriage, a demanding life-long journey on which “the husband and wife aren’t alone; Jesus accompanies them.”

(Vatican City, June 1, 2021) – The Pope Video has just been published with the intention that Francis is entrusting to the entire Catholic Church through the Pope’s Worldwide Prayer Network. In the context of the “Special year of the family,” which began on March 19, 2021, the video focuses on the beauty of marriage and is published in collaboration with the Dicastery for the Laity, Family and Life.  The Holy Father encourages young people to undertake this demanding journey, because “getting married and sharing one’s life is something beautiful.” This is why it is a vocation worth following, since “God has a dream for us—love—and He asks us to make it his own.” The prayer intention reaffirms the nature of this vocation, which “isn’t just a ‘social’ act,” but which is “born from the heart.”

Francis begins the The Pope Video by asking, “Is it true, what some people say—that young people don’t want to get married, especially during these difficult times?” The difficulties and complications that many families and marriages had to suffer due to the pandemic still echo in this question.

The marriage rate, according to some studies, has been dropping notably since 1972 to the point where, in countries such as the United States, it has reached the lowest numbers since such records started being kept. What’s more, in many countries the drop in the marriage rate has been accompanied by an increase in the age at which people marry (the current average in Sweden, for example, is close to 34). Regarding families, not only has the proportion of children born out of wedlock increased considerably in almost all the countries of the OECD, but also the number of divorces has multiplied; in some countries, more than half of marriages end in divorce.

The recent period of confinement, in many cases, resulted in tension and family conflict and made living together a more difficult task than usual. But the Pope’s message encourages us to continue with renewed enthusiasm: “It’s worth making the effort. And on this life-long journey, the husband and wife aren’t alone; Jesus accompanies them.”

A special year dedicated to the family

The Pope Video for June about marriage arrives at a very opportune moment. On the feast of the Holy Family in 2020, Pope Francis convoked a special year dedicated to the family, which just began this past March 19, 2021, with the following motto: “Family love: a vocation and a path to holiness.” This convocation coincides with the fifth anniversary of the apostolic exhortation Amoris Laetitia and with the third of the apostolic exhortation Gaudete et Exsultate. This places this month’s intention in the context of the vocation of love to which each person is called in their place in the home. In addition, it accompanies another important event: the year of St. Joseph, which will last until next December 8.

An important aspect of The Pope Video is how it shows the beauty of marriage and the family as something more than a “social” act: “it’s a vocation that’s born from the heart; it’s a conscious decision for the rest of one’s life that requires specific preparation.”

“Preparing young people and engaged couples for a real vocation, not just for the celebration of a wedding, is a priority” said the Undersecretary of the Dicastery for the Laity, Family and Life, Dr. Gabriella Gambino. “To understand the presence of Christ in the daily lives of engaged couples, and then of spouses, by building on the meaning of Baptism is indispensable in giving young people the certainty that their family project is a response to a definitive call and that this project is possible. In a secularised society that no longer believes in marriage, it is fundamental to proclaim the strength and power of the sacrament as a vocation and to show that family relationships can have a salvific value for people and be a path to holiness. It is a matter of concretely bringing Christ into the lives of families.”

Fr. Fréderic Fornos, S.J., International Director of the Pope’s Worldwide Prayer Network, observed that “the Pope highlights in this prayer intention the beauty of marriage and expresses his desire that young people preparing for marriage have ‘the support of a Christian community.’ Marriage is a vocation, an answer to a call from the Lord; that is, the decision to get married and create a family is the fruit of discernment. Allowing yourself to be carried along by God’s dream for us—love—requires the support and accompaniment of the community. As Francis says to young people preparing for marriage: ‘loving requires a great deal of patience,’ but on this life-long voyage, Jesus, the face of the Father’s love, accompanies them. Let us make our own this dream God has for us of growing in love and daring to embark upon this demanding voyage of marriage and the family during this special year of St. Joseph.”

The Pope Video is an official global initiative with the purpose of disseminating the Holy Father’s monthly prayer intentions. It is carried out by the Pope’s Worldwide Prayer Network (Apostleship of Prayer). Since the year 2016, The Pope Video has had more than 155 million views across all its social networks, and is translated into more than 23 languages, receiving press coverage in 114 countries. The videos are produced and created with the support of La Machi Agency and the team of The Pope Video of the Prayer Network, coordinated by Andrea Sarubbi. The project is supported by Vatican Media. More information at: The Pope Video

The Pope’s Worldwide Prayer Network is a Vatican foundation, with the mission of mobilizing Catholics through prayer and action in response to the challenges facing humanity and the mission of the Church. These challenges are presented in the form of prayer intentions entrusted by the Holy Father to the entire Church. The foundation’s mission is inscribed in the dynamic of the Heart of Jesus, a mission of compassion for the world. Originally founded in 1844 as the Apostleship of Prayer, the PWPN is present in 89 countries and incorporates more than 22 million Catholics. The Network includes a youth branch, the EYM: Eucharistic Youth Movement. In December 2020, the Pope constituted this pontifical work as a Vatican foundation and approved the new statutes.  Fr. Frédéric Fornos, SJ, is the international director of the PWPN.   For more information, visit: https://www.popesprayer.va

adminPope Francis shows the beauty of marriage: “Getting married and sharing one’s life is something beautiful”06.01.2021