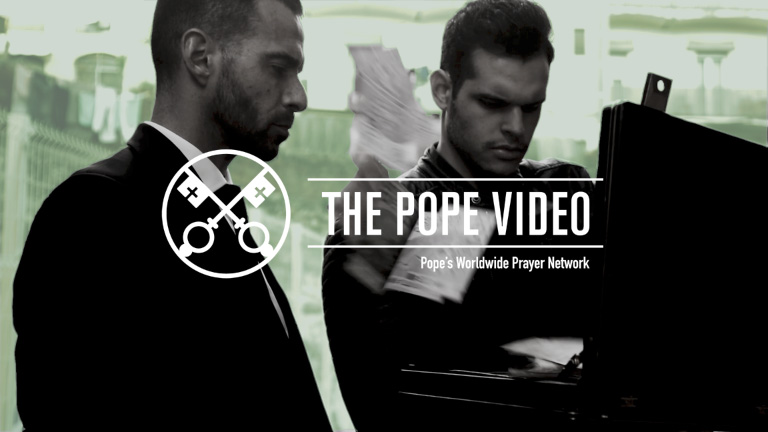 On his part, Fr. Frédéric Fornos SJ, International Director of the Pope’s Worldwide Prayer Network (which includes the Eucharistic Youth Movement, EYM) referred to the Holy Father’s trip to Thailand, during which the pontiff remembered Fr. Pedro Arrupe SJ as a prophet. It was he who founded and gave momentum to the Jesuit Refugee Service (JRS), “and he did so asking one thing first: prayer, more prayer,” Francis said, adding, “We must remember it well: prayer. That is to say, in that physical periphery do not forget this other one, the spiritual one. Only in prayer will we find the strength and inspiration to commit ourselves well and bear fruit in the midst of the ‘messy situations’ of social injustice.”In a petition for the world, the Pope invites us to pray “that the cries of our migrant brothers and sisters, victims of criminal human smuggling and human trafficking, may be heard and considered.”

About The Pope Video
The Pope Video is an official global initiative to disseminate the Holy Father’s monthly intentions. It is carried out by the Pope’s Worldwide Prayer Network (Apostolate of Prayer). The project is supported by Vatican Media. More information at: The Pope Video

About The Pope’s Worldwide Prayer Network
The Pope’s Worldwide Prayer Network is a pontifical work with the mission of mobilizing Catholics through prayer and action, in the face of the challenges confronting humanity and the mission of the Church. These challenges are addressed in the form of prayer intentions entrusted by the Pope to the entire Church. Its mission is inscribed in the dynamic of the Heart of Jesus: a mission of compassion for the world. This work was founded in 1844 as the Apostleship of Prayer. It is present in 98 countries and is made up of more than 35 million Catholics. It includes a youth branch, the EYM: Eucharistic Youth Movement. In March 2018, the Pope constituted this ecclesial service as a Pontifical Work and approved its new statutes. Its international director is Father Frédéric Fornos SJ. More information at: popesprayer.va

About the Migrants and Refugees Section

The Migrants and Refugees Section is a small pastoral office of the Holy See, directed by Pope Francis, which helps the Church be at the side of refugees, who are obliged to migrate, and of victims of human trafficking. More information at: migrants-refugees.va .

About Talitha Kum
Talitha Kum is an international network against trafficking in persons, founded in 2009 by the International Union of Superiors General (UISG) in Rome. It is made up of 43 national networks, led by women religious who are present in 77 countries on 5 continents. It involves a total of approximately two thousand women religious alongside other men and collaborators. Talitha Kum’s mission is to put an end to trafficking in persons through collaborative action centered principally on prevention, protection, and social rehabilitation. More information at: talithakum.info .

adminPope Francis lends his voice to migrants and victims of human trafficking02.02.2020