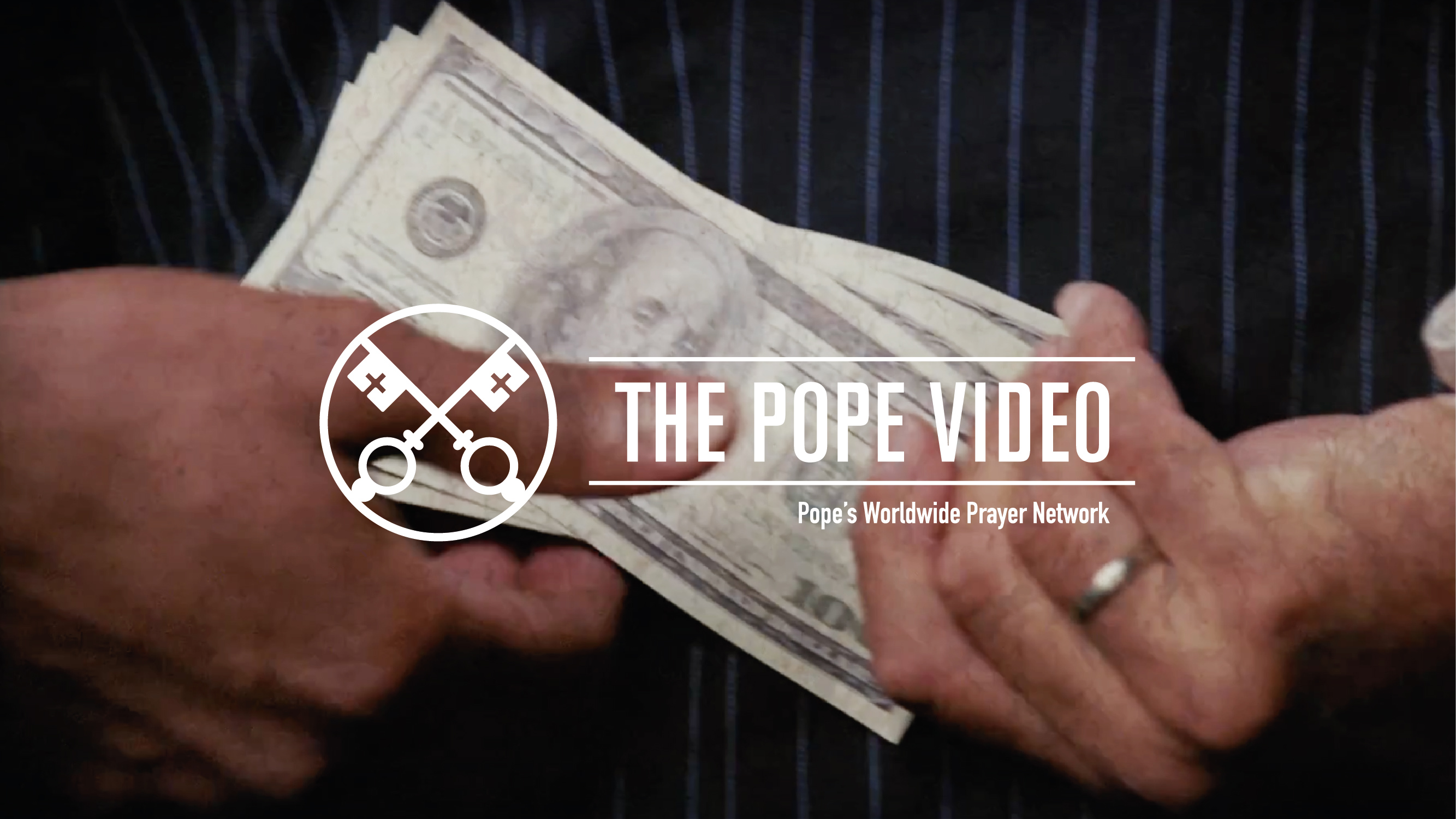 In the February Pope Video, Francis speaks about the consequences of corruption and calls for the condemnation of this evil. The Pope Video is released each month by the Pope’s Worldwide Prayer Network.

VATICAN CITY, February 1, 2018 — In the newest Pope Video, the Holy Father asks that corruption be faced down and condemned. This month, the video was made in conjunction with the Dicastery for Promoting Integral Human Development, a first for the dicastery and a sign of the importance of this theme.

The video creatively condemns the evils of corruption and organized crime, contrasting them with the relationship between justice and beauty.

“Let us pray that those who have material, political or spiritual power may resist any lure of corruption,” Francis invites. “We must speak about it, denounce its evils, and try to understand it so as to show our resolve to make mercy reign over meanness, beauty over nothingness.”

Cardinal Peter Turkson, prefect of the Dicastery for Promoting Integral Human Development, affirmed that “we shouldn’t speak about resolving the issue of corruption in theory. Instead we should confront corruption in every sector. It is the poor who pay for the parties of the corrupt.”

Jesuit Father Frédéric Fornos, international director of the Pope’s Worldwide Prayer Network, noted that it’s not surprising the Pope included this theme among the prayer intentions of this year. “This is something that concerns him deeply,” he said, “and which he has spoken about on many occasions. Corruption affects many nations of the world and it is an evil that destroys and kills.”

The Pope Video on corruption is in line with various initiatives from the Dicastery to draw attention to this scourge, beginning with an International Conference on Corruption held June 15, 2017; the publication of Cardinal Turkson’s book (with Vittorio V Alberti) Corrosione, for which Pope Francis wrote the prologue; and a conference on corruption in Naples scheduled for February 3, where the video will be shown.

The intentions are entrusted each month to the Pope’s Worldwide Prayer Network and The Pope Video is produced by La Machi Communication for Good Causes with the support of the Society of Jesus, IndigoMusic, GettyImagesLatam, Doppler Email Marketing and the collaboration of Vatican Media. It also has Aleteia as a media partner. Since its launch in January of 2016, it has had more than 20 million views on its networks.

About the Pope’s Worldwide Prayer Network (Apostleship of Prayer)
The Pope’s Worldwide Prayer Network addresses the challenges facing humanity and assists the mission of the Church. Its mission is to unite people in prayer and service in response to the challenges facing humanity which the Holy Father expresses in his monthly intentions. Those who participate in this network are encouraged to become apostles in daily life through a spiritual path called “Way of the Heart,” transforming those who take that path in the service of the mission of Jesus Christ. Founded in 1844 and present in over 98 countries, the Apostleship of Prayer unites more than 35 million people in its network, including its youth branch, the Eucharistic Youth Movement. For more information: http://www.popesprayer.net/.

About the Dicastery for Promoting Integral Human Development
The Dicastery for Promoting Integral Human Development was created by Pope Francis and has been running since January 1, 2017 under the direction of Cardinal Peter Turkson. Within its scope, the Dicastery explores those issues related to migrants, the needy, the sick, the excluded, the marginalized, the victims of armed conflicts and catastrophes, the imprisoned, the unemployed and the victims of any form of slavery and torture.