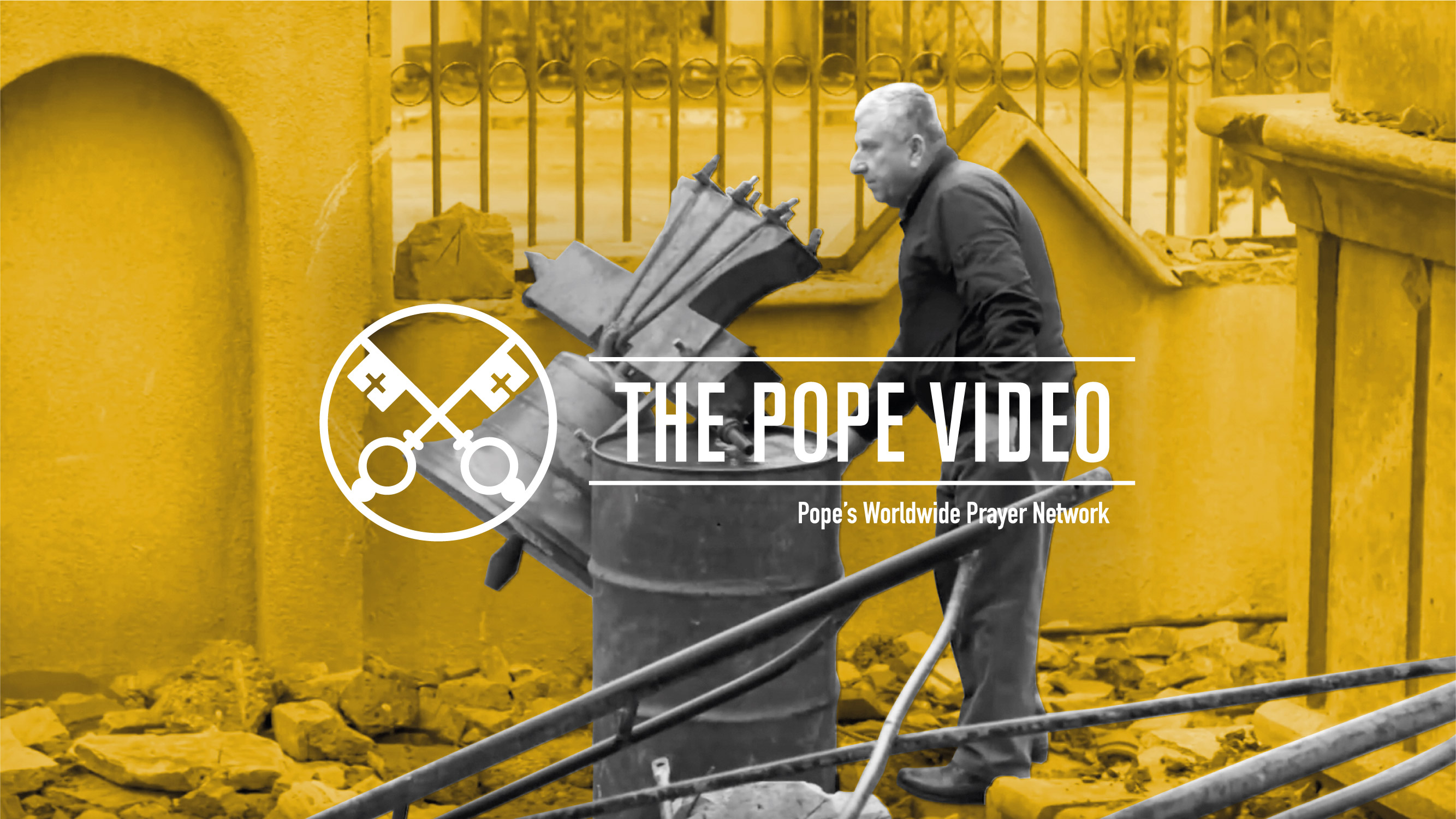 In the March edition of The Pope Video, Pope Francis asks us to pray for persecuted Christians in places where religious freedom and human rights are not guaranteed.

(Vatican City, March 5, 2019) – Making the sign of the cross, reading the Bible, going to Mass on Sunday, talking about Jesus, praying the rosary… These seem like totally normal, everyday activities to us. However, in many parts of the world that is not the case. Doing any of these things could mean risking your own life: being killed or stoned, or ending up in a forced labor camp.

This year began with an attack during a Mass at the Cathedral of Jolo in the Philippines, where 23 people died. Last year, 40 missionaries were killed around the world, 35 of whom were priests. Two were from the Central African Republic, massacred at the end of November together with 80 members of the faithful at the Alindao refugee camp.

Some cases have gotten more media coverage, such as that of Asia Bibi, the Pakistani mother accused of blasphemy, condemned to death, and then freed after 9 years of prison. There’s also the case of the 21 Egyptians who were decapitated in 2015, and the massacre at Pershawar in December of 2014, when more than 130 students were massacred.

There are thousands of other cases like these that we don’t hear about, because they don’t make it into the media. According to the Religious Freedom Report by the pontifical foundation Aid to the Church in Need (ACN), Christianity is the most persecuted religion in the world. This fundamental human right is being gravely threatened in 38 countries, 21 of which are classified as places of persecution. “In many places around the world, religious freedom isn’t an idea; it’s a question of survival. It’s not about whether you feel more or less comfortable with the ideological foundations underlying religious freedom; it’s about how to avoid a bloodbath!” says Thomas Heine-Geldern, executive president of ACN.

In The Pope Video for the month of March, a project of the Pope’s Worldwide Prayer Network, Francis says that “it might be hard for us to believe, but there are more martyrs today than in the first centuries,” because “they speak the truth and proclaim Jesus Christ” even “in countries where, in theory and on paper, they protect freedom and human rights.”

He asks us all to “pray that Christian communities, especially those who are persecuted, feel that they are close to Christ and have their rights respected.”

On his part, Fr. Frédéric Fornos, SJ, international director of the Pope’s Worldwide Prayer Network and of the Eucharistic Youth Movement, said that “the situation of persecuted Christians in the world seems less remote and abstract every day. It’s them, but it could be us. As the Holy Father says, even in countries where in theory and on paper they protect freedom and human rights, subtle discrimination can be present. ‘Blessed are you when they insult you and persecute you, and say every kind of evil against you falsely because of me.’” (Matthew 5:11).

Where can I consult the 2018 Religious Freedom Report?

The Pope Video is an official global initiative to disseminate the Holy Father’s monthly intentions. It is carried out by the Pope’s Worldwide Prayer Network (Apostleship of Prayer). The project is supported by Vatican Media. More information at: https://thepopevideo.org/.

The Pope’s Worldwide Prayer Network is a pontifical work with the mission of mobilizing Christians through prayer and action, in the face of the challenges confronting humanity and the mission of the Church. These challenges are addressed in the form of prayer intentions entrusted by the Pope to the entire Church. This work was founded in 1844 as the Apostleship of Prayer. It is present in 98 countries and is made up of more than 35 million Catholics. It includes a youth branch, the EYM: Eucharistic Youth Movement. In March 2018, the Pope constituted this ecclesial service as a Pontifical Work and approved its new statutes. Its international director is Father Frédéric Fornos, SJ. More information at: https://www.popesprayer.va/

Aid to the Church in Need (ACN) is a Pontifical Foundation that reports directly to the Holy See. As a Catholic charitable organization, ACN supports the faithful wherever they are persecuted, oppressed, or in grave need, through information, prayer, and action. Founded in 1947 by Fr. Werenfried van Straaten, the organization currently works in more than 140 countries throughout the world. With nearly 5,000 projects per year, the Foundation provides emergency assistance, finances means of transport and communication necessary for evangelization, helps build churches, and funds Mass stipends and the formation of religious and seminarians, among other things. More information at: www.acn-intl.org

admin“Pray that Christian communities, especially those who are persecuted, feel that they are close to Christ and have their rights respected.”03.09.2019