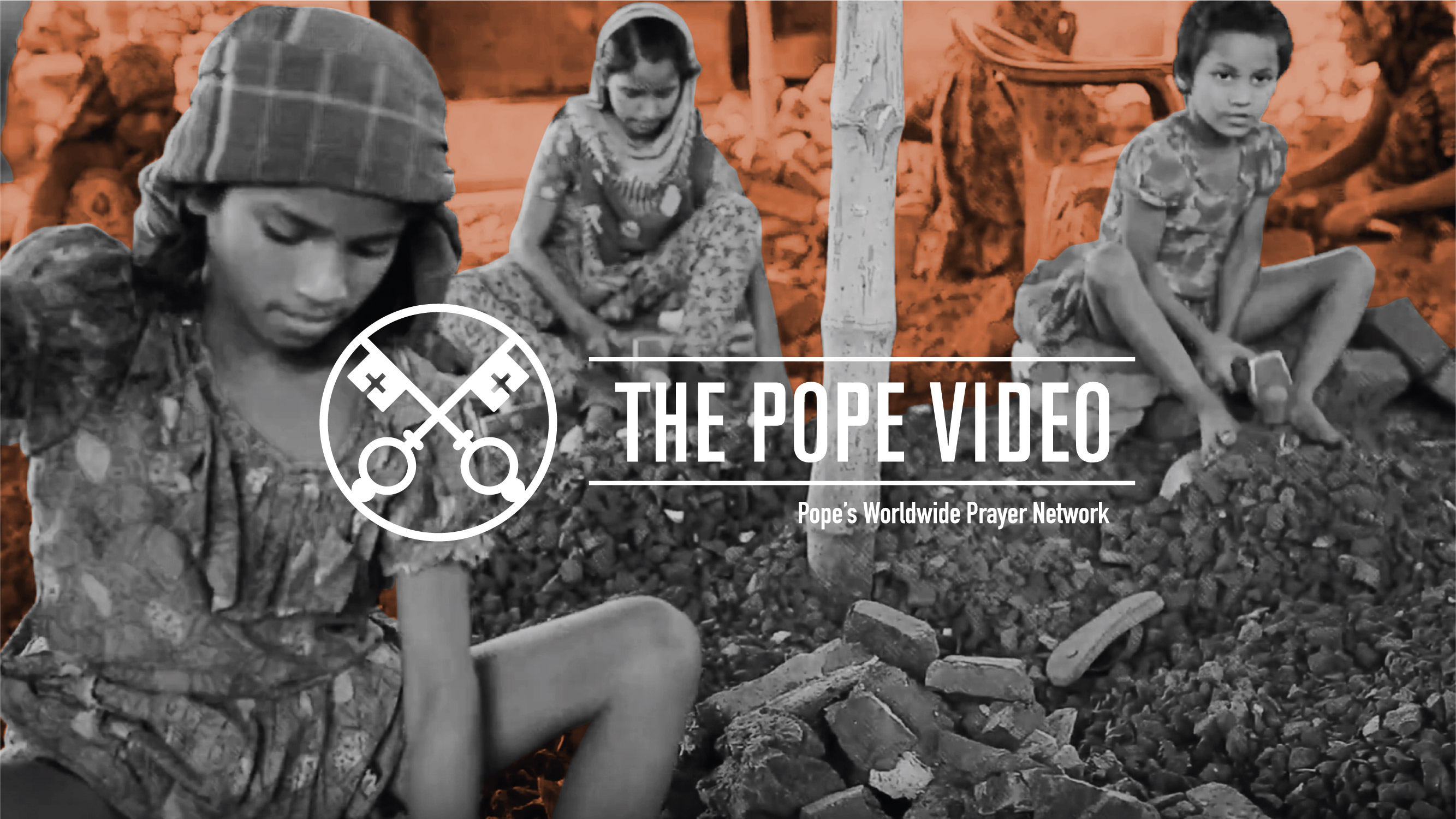 In The Pope Video for February 2019, the Holy Father asked that we pray for a generous welcome of the victims of human trafficking, of enforced prostitution, and of violence.

(Vatican City, February 7, 2019) – We see them every day on the news and in the papers. We call them economic migrants, refugees, undocumented immigrants, illegal aliens, displaced people, unaccompanied minors, caravans, or many other things, often forgetting that they are human beings.

There are millions of them, fleeing their homelands each day due to war, hunger, political persecution, religious persecution, or situations of extreme poverty, facing countless forms of abuse. What we don’t see are the many criminal organizations that profit from this phenomenon by enslaving men, women, and children for the purposes of manual labor, sex work, organ trafficking, or forced participation in begging or crime.

In the February edition of The Pope Video, Francis reminds us that slavery “is not something of other times,” and that “no one can wash their hands of it without being, in some way, an accomplice to this crime against humanity.”

In collaboration with Talitha Kum, the worldwide network of institutes of consecrated life committed to fighting human trafficking, the “Migrants and Refugees” Section of the Dicastery for Promoting Integral Human Development, the Jesuit Refugee Service, the Pontifical Academic of Sciences and the Apostleship of the Sea, the Pope’s Worldwide Prayer Network is joining in the world day of prayer and reflection against human trafficking, with the hashtag #TogetherAgainstHumanTrafficking.

Commemorating February 8, the day when Saint Josephine Bakhita died, Francis invites us to pray “for a generous welcome of the victims of human trafficking, of enforced prostitution, and of violence.”

On his part, Fr. Frédérick Fornos, SJ, international director of the Pope’s Worldwide Prayer Network, said: “Faced with this human tragedy—faced with so much suffering, defenselessness, and anguish of men, women, and children who are victims of human trafficking and of slavery, often in the context of migration—what can we do? Denounce our complicity, but also pray. Cry out in prayer from the heart, the kind of prayer echoed in the psalms.” Fr. Fornos also mentioned that a few days ago the “Migrants and Refugees” Section of the Dicastery for Promoting Integral Human Development presented two important documents for fighting against all forms of human trafficking. “These are not theoretical discourses,” he added. “These documents are a powerful call to change society, and they propose concrete actions for the entire Church. Pope Francis is strongly committed to the fight against this scourge in its various manifestations.”

The Pope’s Worldwide Prayer Network is a pontifical work, with the mission of praying and of living the challenges of humanity that concern the Holy Father, expressed in his monthly prayer intentions. It was founded in 1844, and is present in 98 countries; it is made up of more than 35 million people, including it’s youth branch, the Eucharistic Youth Movement. In March 2018, the Pope constituted this ecclesial service as a Pontifical Work and approved its new statutes. Its international director is Father Frédéric Fornos, SJ. More information at: https://www.popesprayer.va/

About the Migrants and Refugees Section

The Migrants & Refugees Section is a small pastoral office of the Holy See, personally directed by Pope Francis, working to help the Church worldwide to accompany vulnerable people on the move, including those who are forcibly displaced by conflict, natural disaster, persecution or extreme poverty, refugees and victims of human trafficking. More information at: https://migrants-refugees.va/

Talitha Kum is an international network against human trafficking founded in 2009 by the International Union of Superiors General in Rome (UISG).  It is comprised of 43 national sister-led networks covering 77 countries, in 5 continents. It involves approximately 2,000 religious women, men and their collaborators. The mission of Talitha Kum is to end human trafficking through collaborative actions focused mainly on prevention, protection and social rehabilitation. More information at: https://talithakum.info

admin“Pray for a generous welcome of the victims of human trafficking, of enforced prostitution, and of violence.”02.02.2019